Ok, so as partners, we are constantly faced with the decision of using either “SharePoint Social streams” or Yammer when deploying SharePoint to customers. The last I heard about this was from Jeremy Thake’s keynote speech at the SharePoint Saturday UK conference in November 2013. His guidance then was essentially:

However, we might be starting to get some subtle hints from Microsoft on this guidance, or at least hints to where this is going.

When I sign in to Office 365 and I access my Newsfeed from my Social profile, I see this banner across the top:

The interesting thing, is that it it’s not only telling us to use Yammer (they’ve been banging that drum for a while now), but also that the SharePoint Newsfeed is still relevant. “This page displays updates for sites you’re following”.

Use the sites’ social features to track documents, items and conversations there. Interesting in people and what they have to say? Use Yammer. Best of both worlds. Well, almost.

Redundancy Everywhere. Even on links!

Another thing, this might be temporary (everything seems to be here), but when you click on “Recent” in your mysite Quick Launch, it takes you to the homepage, which is the same as the “Newsfeed” page. 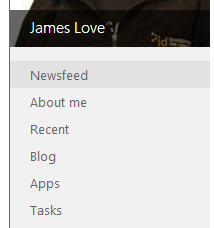 Broken? As Design? Something else coming up? You be the judge.

Whilst I’m on the topic of being subtle, Laura Rogers posted this tweet last night:

“General Availability”? I thought this had been generally available for quite a while now. I’ve even played with it a little bit. But it seems now everyone can. And this comes just days after Microsoft Office team announced that InfoPath 2013 was to be the last version. This is further making me think that the Access Web Apps functionality will slowly be hinted as a replacement for InfoPath in the future. I guess we’ll hear more at the SharePoint Conference 2014.