If you are running PerformancePoint Server on SharePoint 2010, and have installed SSRS 2012, you will notice that you cannot edit any SSRS Reports within Dashboard Designer, you’ll get the following message:

Sometimes (though not always) you get this warning which helpfully gives you the link to the SSRS 2008 R2 Report Viewer utility. 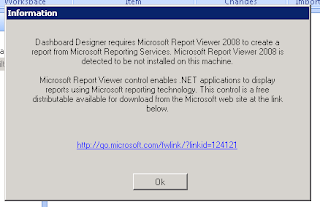 SSRS 2012 does indeed install its own version of the Report Viewer assemblies, but PPS will only look for a specific version (that for SSRS 2008).

Install this (the 2008 R2 version) and restart Dashboard Designer. You should now be able to edit SSRS ReportViews.