Disclaimer:
The examples shown in this post are extremely unrealistic in terms of real-life scenarios. The numbers and types of fields used in these experiments are designed purely to test the physical limitations of SharePoint. At no point is it suggested that a real-life use of such list architecture be used. If you do have lists this wide and are wondering why it is slow, remove the nutmeg from your coffee and learn how to design actually usable schemas. 🙂


Also: thanks to a commenter, “Pro100Oleh”, it’s been pointed out that the Admin account (under which my tests were performed), does actually put more stressful queries into the database. At this moment, I don’t have the time to compare with regular user accounts, so if someone else does, they’re welcome to share the results!

At first, I did this with simple Text fields, and the tests faired pretty well. After keeping folks updated with my proceedings, Neil Hodgkinson reminded me that it’s lookup fields that really caned performance. So I modified the app ever so slightly to create lookup list columns instead. The lookup columns are set up to look at the Title field of the same list, and when populating the new items, I set the lookup value to the previous item in the list to the one just added. Confused? I’m just creating lots of fields and lots of items and timing how long it takes to do so.

I scripted the application so I could run it with increasing numbers of fields, then I was able to chart the performance hit as the number of fields grew. See the results below, and also the source code to the application I used. The code isn’t exactly ideal at the moment to be a true, flexible performance stress testing application, but it sufficed to create the tests and time how long it took to populate them.

Whilst performing these test, I came across a similar blog post from a few years back, when SharePoint 2007 was still in beta. This post kinda brings these findings up to date, as well as testing with Lookup fields (the original post only tested Text Fields, and lots of them!). Read this post here: http://www.sharepoint-tips.com/2006/06/sharepoint-2007-column-limits.html

For each test I ran, I chose a fixed number of fields that would help in contribute to the stress test such that the number of fields created in each turn could show a perceived reduction in performance. The tables below show the number of items created and the fields created in each iteration. The timings shown firstly show the time for the entire operation in minutes, secondly the average time to create each list item in minutes, and finally a ‘delta’ which shows the difference in time (seconds) since the previous test iteration.

I decided to create 1000 list items on each iteration, with each adding 10 more fields. The following table shows the results:

And here is the graph: 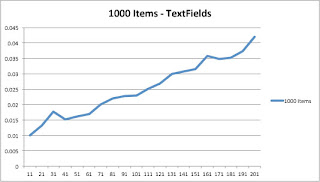 This graph shows a steady increase the time to create each item as the number of fields increases. Nothing really out of the ordinary here, though if you have 200 text fields in a list I’d love to see your user interface…

After being pointed out to the fact that Lookups really degrade performance I decided to go all out. This  first test tries out a relatively ‘short’ list with 100 items, but increasing in Lookup fields by 5 each time. Obvious, as the list grows, the performance of the lookup degrades as there are more items in the lookup field, so the average time per item shows as an average across the entire test run. At least that is the assumption. See the second test for a challenge to that.

Here’s the table for the first test:

And here’s the graph:

The first few test runs, up to 20 lookup fields didn’t show much of a reduction at all, but performance soon started to take a hit from 25 fields, and getting exponentially worse from 50 fields and up, where it’s taking nearly 3 seconds to create every single item!

For the second test with Lookup Fields, I decided to see what would happen with ‘longer’ lists, that had 500 items. This is under the assumption that a lookup field’s performance degrades as the list upon which the lookup operates gets longer.

This graph shows a steadily decreasing reduction in performance (disregarding the two anomalies). The thing to note here (apart form the trend towards an eventual exponential trend in performance reduction), is that 15 fields with 500 items is timed at 0.26664 seconds per item. The same width-list with 100 items came in at 0.021.

This mean a list with 15 lookup fields that looks up to 500 items is 10x slower than looking up to a list with only 100 items.

Stating the absolute obvious? Most definitely, but at least now you can see some numbers proving it 🙂

Here’s the source code for my helper class and console application to create the lists and the list items. By the time I was scripting this application I had it optimised to create lookup fields, but at least you can see the process used.

And here’s the Console App: